St. Louis is my favorite city in the United States to visit. I lived there for three years during law school and MBA, and there are so many fun things do and many of them are free. I would recommend at least two full days to get the full experience.

Getting to St. Louis

Cathedral Basilica– This cathedral is absolutely beautiful on the inside. It reminds me of the duomos (huge cathedrals) in Italy and I would consider it one of the top two cathedrals in the United States. It is free to go inside and the ceilings are all mosaics.

Budweiser Tours– You cannot leave St. Louis without visiting where Budweiser was originally brewed. There is a free tour that lasts about 30 minutes and you can just walk in and sign up. You also get one free beer per person. Budweiser also has paid tours, which last a little longer and you should book a month or two in advance.

Gateway Arch– If this is your first time in St. Louis, you have to at least go to the arch. Tickets to go up to the top of the arch are $13 and if you are visiting on the weekend, you should book in advance.

Missouri Botanical Gardens– The botanical gardens are quite large, so make sure to bring comfortable walking shoes. Admission is reasonable and I would recommend going to any special events they have.

City Museum– The City Museum is like nothing you have likely every experienced. It was an older ten story International Shoe Factory that has been converted to an urban jungle gym. Be sure to wear active clothing and tennis shoes.

Forest Park– USA Today voted Central Park the best in the United States. Here’s what they said “Located in the heart of St. Louis, Forest Park encompasses nearly 1,400 acres of land. It is one of the largest urban parks in the United States, nearly a third larger than New York City’s Central Park. The St. Louis Art Museum, St. Louis Science Center and Planetarium, History Museum, Zoo, Jewel Box and Muny Theater are a few of the many attractions located on the grounds. The park is widely used for outdoor recreation and features bicycle paths, jogging trails, baseball diamonds, soccer fields, boating, and skating.”

St. Louis Cardinals Baseball Game– Cardinals games are very fun and you have one of the best views in baseball. The stadium is downtown and very close to the train. 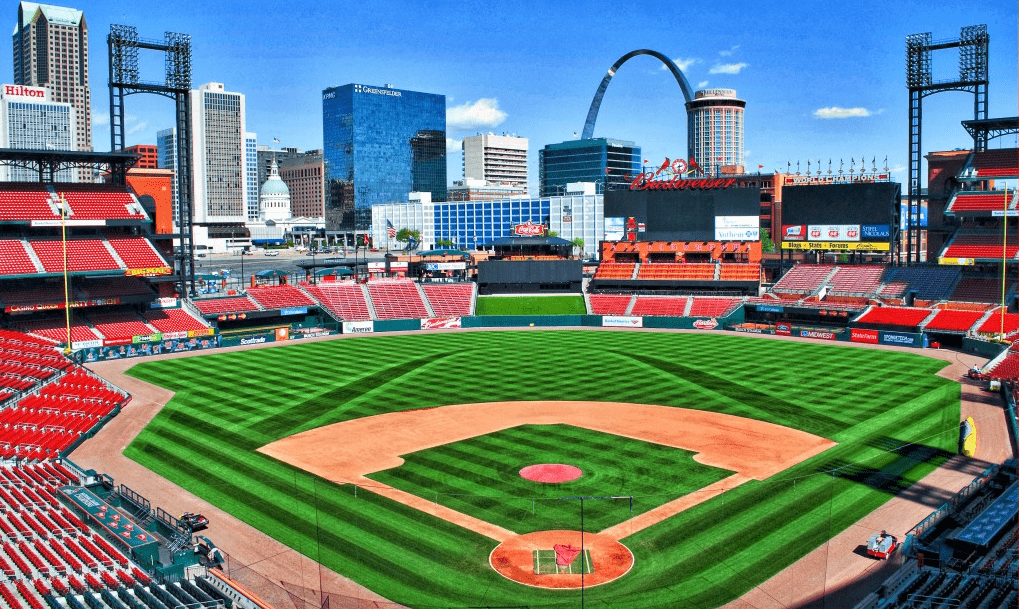 St. Louis Art Museum– The art museum is free and located in Forest Park near the Zoo. You also have very beautiful views of the Forest Park as you enter and exit the museum.

The Loop– I lived in this neighborhood for 3 years while attending Washington University, which is nearby and very beautiful. The Loop is a fun place to eat and drink. The trolley car project should be completed soon. Many of the restaurants recommended below are in this area.

The Grand Hall– The Grand Hall is located inside of the Hilton Union Station (Curio Collection). It used to be an old railway terminal that they have converted into a great bar. The lights show is pretty spectacular and occurs usually once per hour.

Places to Eat and Drink

Pappy’s Smokehouse or Bogart’s Smokehouse– St. Louis is famous for BBQ, so you have to go to at least one of these. Or go to both and tell me which one you preferred.

Broadway Oyster Bar– This is a really great New Orleans’ style dive bar and restaurant near downtown and the Cardinals stadium. It is very fun on a Friday or Saturday night, but it can be hard to get into.

Jeni’s Ice Cream– This is the best ice cream that I have ever tasted. It is located in Central West End, which is also a really fun neighborhood for restaurants and bars.

Seoul Taco– This is a Korean Taco place that started in St. Louis and has now started expanding to other cities. The restaurant is located in the Loop neighborhood, which is my favorite neighborhood in St. Louis.

Blues City Deli– A really great deli that is close to the Budweiser Distillery.  You should probably expect a line with a 10-20 minute wait.

Urban Chestnut– This is the best craft brewery in St. Louis. They have several locations and a fun Biergarten.

Mission Taco– Mission Taco has several locations throughout St. Louis. After 10 pm, they have $2 tacos, which is a great deal.

Fitz’s– This place bottles its own soda and has my favorite root beer. It’s a good place for families to go, but on the weekends there can be a long wait. It is located in the Loop area and be sure to grab a case of root beer if you can transport it.

Blueberry Hill– Chuck Berry used to play here once a month before he passed away. This is a good place to grab a beer in the loop area and right across the street from Fitz’s.

Brunch: Rooster, Southwest Diner, or Half & Half,

Three Sixty– This downtown bar is located on the rooftop of the Hilton. Drinks are little pricey, but the views are great.

Pastaria– This is a really good upscale pasta place located in St. Louis’ other downtown area, Clayton, which is about 8 miles from the main downtown.

Ballpark Village– If you want to go out for a fun night of bars and drinking, ballpark village is a great place to go.

St. Louis Distillery– This distillery was voted the “Best Craft Vodka Distillery” in the United States according to USA Today. It’s also my favorite vodka, and I will have them ship me vodka for Christmas presents. The distillery is quite small, only open on weekends for tours, and tours are typically bought through Groupon or LivingSocial. You get to try a lot of different Vodkas on the tour, so I advise have a designated driver or take an Uber.

Marriott– St. Louis Grand– This hotel was recently updated and very nice on the inside. Wells Fargo’s code is likely the best.

Drury Inn– Drury Inn was founded in Missouri and they have two nice and reasonably priced hotels at Union Station and near the Arch.

Moonrise Hotel– This hotel is not affiliated with any hotel chain, but it is similar to Kimpton Hotels. It is very modern on the inside, has a great rooftop bar, and is in the middle of the Loop neighborhood.

Knight Center (Washington University) Hotel– If you need to stay near Washington University, very few people know that the University has a hotel in between the Business and Law School. The rooms are very nice and the rates are reasonable, especially for parents of students or prospective students visiting (if applicable, mention that when you call to book). There is also a nice pub inside and free snacks and beverages for guests.