Best Ways to Use Asiana Airline Miles for Maximum Value

Asiana has a pretty good award chart for Star Alliance partners and Etihad. ANA does have a better Star Alliance award chart, but only allows you to book roundtrips, whereas Asiana allows one-way awards. However, since Marriott is the only major transfer partner of Asiana, it may be hard to accumulate a large number of miles with Asiana, unless you sign up for a Bank of America Asiana credit card every 3-6 months.

Booking: Online or call 1-800-227-4262. You must book within 3 days of departure. To book online, you will need to set up a frequent flyer account with Asiana. After that, visit this link and click “International Mileage Ticket Issuance”

Round the World: Costs 140,000 points in economy class and 230,000 points in business class. You one way from the point of departure, flying over the Pacific and the Atlantic ocean, and finishing traveling at the departing country. Backtracking is allowed within the same region. There must also be at least 10 days between the date of initial departure and the final date of arrival. Seven stopovers are allowed and up to twice in the same country.

Booking for 2 or more people: You cannot book for a friend or unmarried significant other. Only family members, which are a spouse, child, parent, grandparent, grandchild, brother, sister, son-in-law, daughter-in-law and parent-in-law. You may need to provide documentation as well and register online.

Asiana Award and Upgrade Chart (below)- Asiana has a slightly complex award chart that has a high and low season and has a points surcharge for their higher end business and first class.

Star Alliance Award Chart (the United States and Canada are below)

Etihad Award Chart (the United States and Canada are below. Appears to be the same as Star Alliance)

Round the World– Economy Class for 140,000 points and Business Class for 230,000 points. Must book on Star Alliance partners. Can do up to seven stopovers and up to two in the same country.

Star Alliance Upgrade Chart (the United States and Canada are below)- Points on the chart are for a one-way trip. Your ticket must be either in Economy Class (Y, B) and Business Class (C, D), which are usually very expensive refundable fare classes. So this chart would only be good for flying for traveling consultants who want to upgrade themselves to business class from economy.

Maximum Permitted Mileage (“MPM”)– You cannot go over the Maximum Permitted Mileage, which is the maximum distance allowed between the departure city and destination. You can find this number via Expert Flyer’s paid service or send me an email at andy@dealspoints.com.  This means that you can’t fly from Los Angeles to Tokyo via the Middle East on a single ticket (it would cost two separate awards), but you could fly New York to Singapore via the Middle East.

Asiana Awards– Awards on Asiana’s own flights offer a good value and you can also do a free stopover in Seoul.

First Class Awards– Asiana prices first class only slightly higher than business class. Many programs require 50-100% more points between business class and first class. One of the best values is Lufthansa first class from LAX for 50,000 points one-way (plus about $500 in taxes), but award space will only open up with 14 days before departure, it takes 7-14 days to transfer from Marriott, and you must book Asiana awards within three of departure.

The U.S. to Europe– This award only costs 40,000 points one-way or 80,000 points roundtrip in business class on Star Alliance partners.

Etihad– Etihad does not have fuel surcharges, so they are a great option. If you want to fly Etihad’s amazing first class, you will usually not find award space on the JFK to AUH route, but you should find plenty of space in reverse from AUH-JFK. Asiana does limit awards by MPM (Maximum Permitted Mileage), so you can’t fly from Los Angeles to Toyko via Abu Dhabi (MPM on that route is 6,549 and that route is 13,495 miles). I subscribe to Expert Flyer so I can see the MPM, so you can either do a free trial or shoot me an email at andy@dealspoints.com to find the MPM for a route. Trips that don’t violate the MPM rule and should work are New York to Bangkok/Singapore/Ho Chi Minh City; New York/Chicago to Perth; and anywhere in the U.S. to India. Southeast Asia seems to be the best value for 135,000 for business class roundtrip and 180,000 for first class (if one-way, half the number of points).

Points are based on round-trip travel during the low season. The high season dates are below and require 50% extra miles. For flights departing the U.S., the high season is May to the beginning of July and most of December. 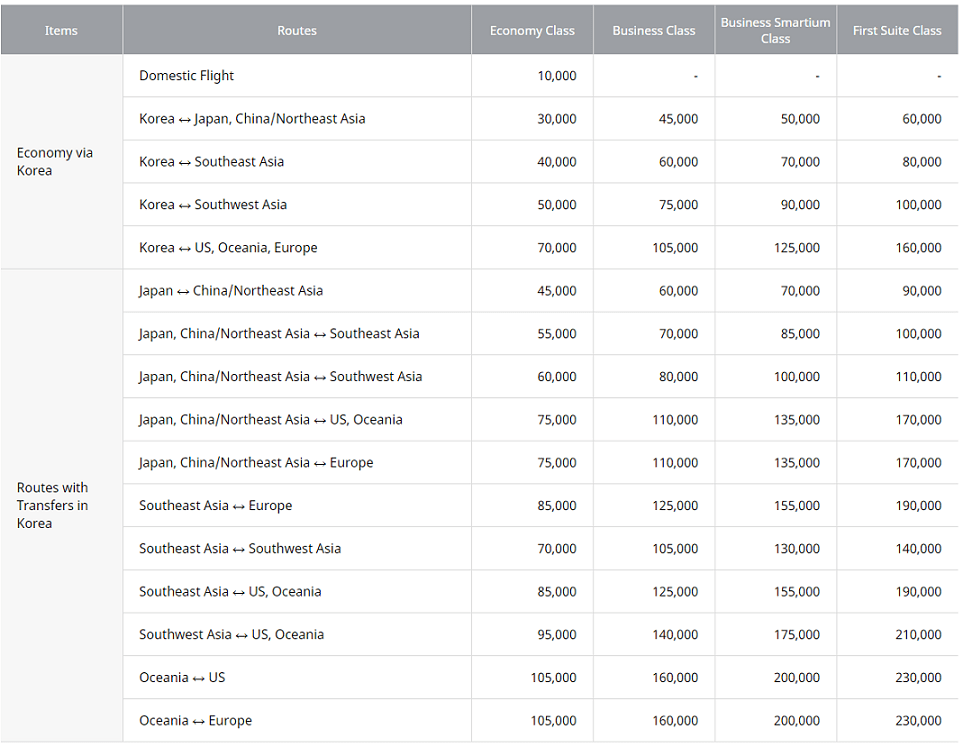 Star Alliance and Etihad Award Chart for USA and Canada 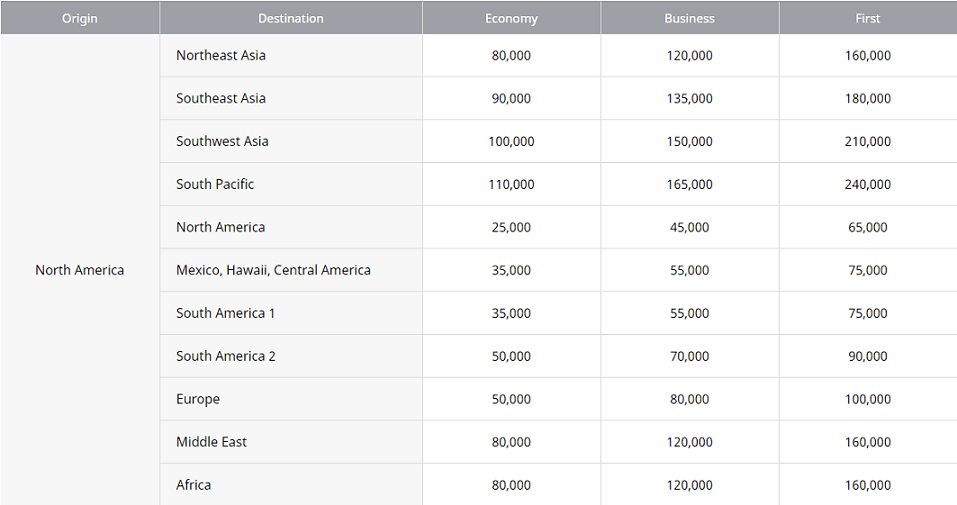 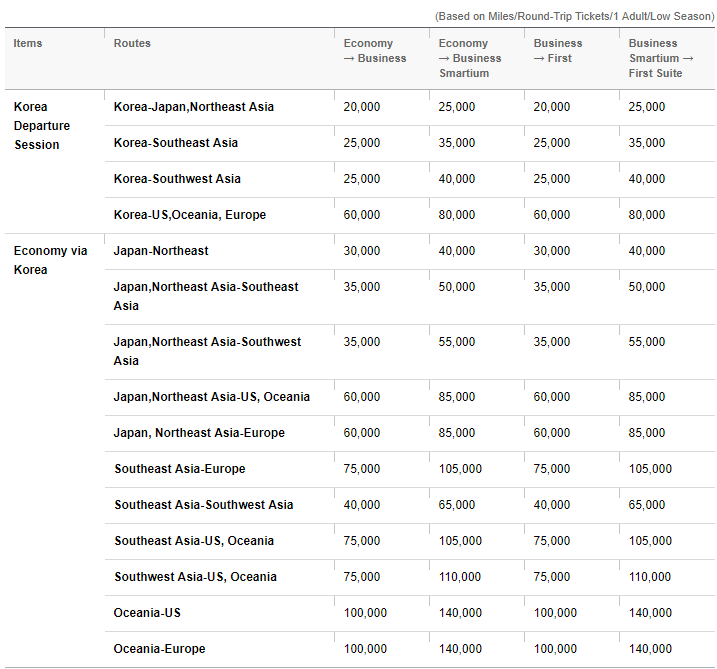 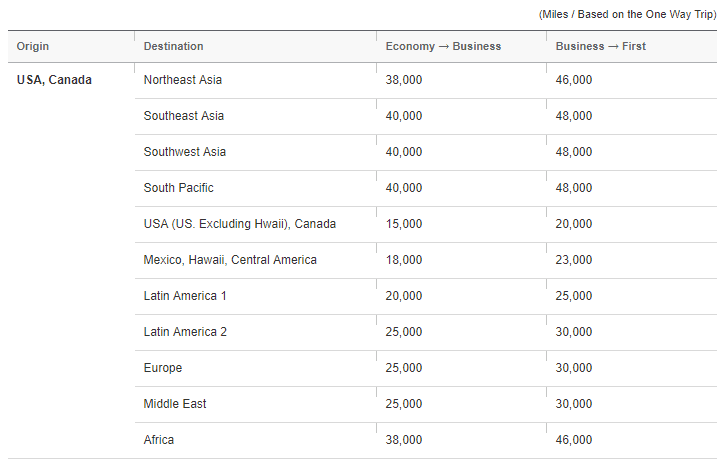