I collect 1:400 scale model airplanes and I am planning on building a model airport. My model airport will not be as cool as the huge live-action model airport in Hamburg, but it will look more like this (but in the layout of Atlanta’s Airport). The new airport will be located in St. Louis and called Charles Lindbergh International Airport, to pay homage to the first man to cross the Atlantic in the Spirit of St. Louis airplane. St. Louis does have a nice and underutilized existing airport, but a major international airport needs space for A380s, an American Express Centurion Lounge, and a large hotel connected to the terminals, so that is why I did not recreate an exact copy of St. Louis’ airport.

Below are the exact models that I have. The pictures are not mine, but once I build my airport, I will take high-quality photos. If you would like more information on 1:400 model airplanes, I recommend this website.

This is completely hypothetical. St. Louis is a great city, but too small for a major international hub. However, it would be a great hub for an airline like Alaska or JetBlue, who really lack a Midwest hub. The real St. Louis Airport can handle 30 million people a year (reached that number in 1999 and 2000), but now flights are down to about 14 million people with the loss of TWA.

For my model airport, I try to follow two rules. First, each airplane represents two daily international flights (which in real life would be 2-4 actual planes) or four daily domestic flights. Second, the routes must be feasible in both distance and destination (the airline flies that route from the US). If you were wondering why I have so many wide body aircraft instead of narrowbody (737 or A320), it is because the wide body aircraft are about 2-3 times the size of the narrowbody and higher quality for only about $7-10 more. (Narrowbody models are about $30-35 and Widebodies are $40-50). 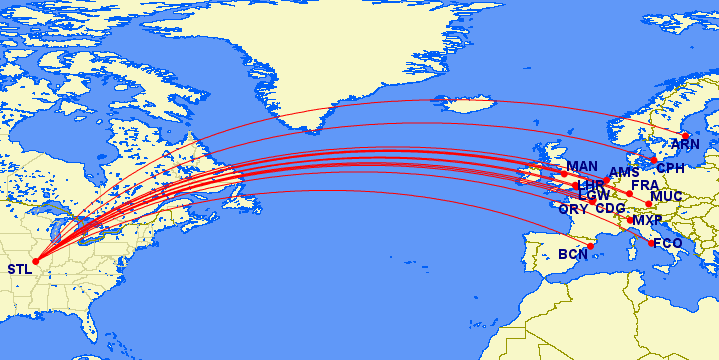 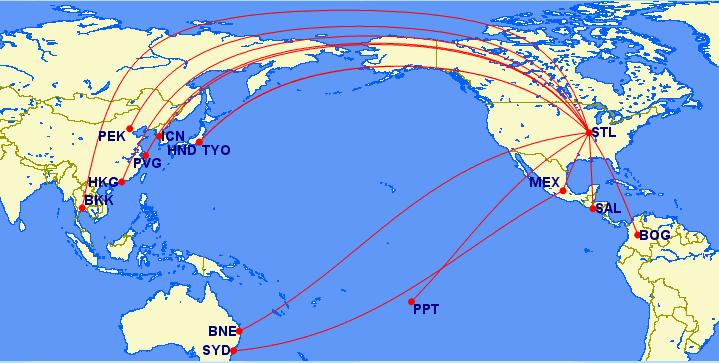 St. Louis to the Middle East